This is an interesting case from the Technet forums that resulted in a workable solution. The question raised was “After having worked with OCS for several months, one thing is especially frustrating. How are we supposed to build factored, meaningful, maintainable workflows without the ability to chain them together?” This got me thinking about some recent testing I had done using the timeout value for queues. If we create a low timeout value for the queue then we could push the call to another contact object without interuption and hence a new response group workflow.

I know that I wouldn’t be the first to think of this but using the queue in this manner gives several benefits. First, it creates contact object for the branches in the ACD so it allows the contacts to be used directly since they now have a Tel URI associated with them. It allows users to transfer people directly to another queue rather than at the beginning of the ACD and having to go through the menu. Jon from Data Balance threw together this diagram to show what he did. This could really open up some quite complex scenarios.

Jon did point out a pitfall with his testing though. The caller will hear ringing instead of MOH. Not everyone will be happy with that so it may only be suitable in some instances. 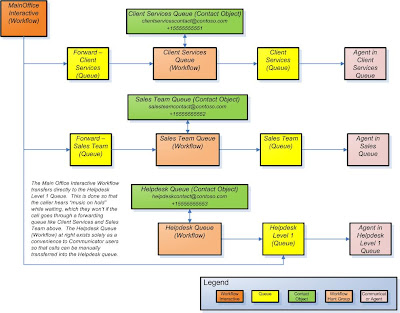 Thanks to Jon from Data Balance for sharing his diagram with me and the hard work he did testing to ensure the idea worked. I really enjoy this type of adhoc design thinking, especially when it works :-)
Email ThisBlogThis!Share to TwitterShare to FacebookShare to Pinterest