I recently posted about Lync 2010 call failures post CU4. This behavior has been changed in CU6/June to avoid service provider variances while still providing faster recovery/discovery of failed gateways for 911 emergency calls. See below:

For those that experienced issues after the CU4 update the June update should over come this issue without any other changes.

PowerPoint Viewing with Lync for iPad Version1.5 is here!

With Lync 2010 June cumulative updates it introduces a new Lync for iPad feature for viewing PowerPoint. It does require that your infrastructure have the June updates installed for Lync Server 2010 as well as the new Lync for iPad version 1.5 installed. The new iPad client is also compatible with earlier updates but you wont get the new PPT view feature until you apply the June updates to Lync Server.

This is a great enhancement to controlling the Lync Edge.

Just wanted to highlight a specific fix in CU6 that I have run across with a few deployments. Previous versions had an issue when two companies with Lync deployed but not federated tried to join each others online meetings.

The SNOM 821 is packed full of interesting features that would make the adamant PBX legacy old school person think twice about what Microsoft has to offer with its device partners. Overall I was impressed with what SNOM have achieved with the latest pre-release build of the SNOM UC Edition firmware. SNOM’s UC Edition is developed by SNOM. This enable SNOM to bring different features to the forefront to set it self apart from the Lync Phone Edition firmware which is produced by Microsoft.

What I really like is that SNOM has managed to do some interesting stuff and keep the price at around $200 bucks or less. In this review I will try to hit on some of the features I thought were a little different. 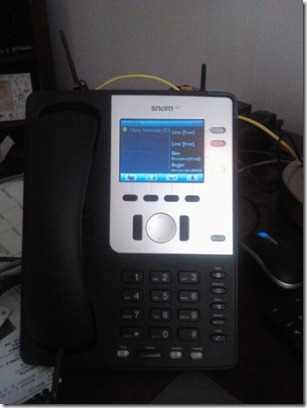 Figure 1: The physical design is pretty large but they have managed a good layout of keys and features. 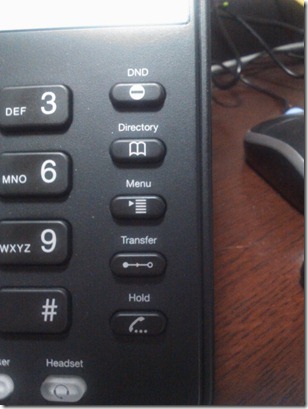 Above is the feature key layout. Take note of the DND feature key because below is the effects of do not disturb. Its pretty obvious that your in DND mode as well as the ability to update your presence in Lync. My Lync presence is reflected with the red M&M in the background of the much larger DND symbol. 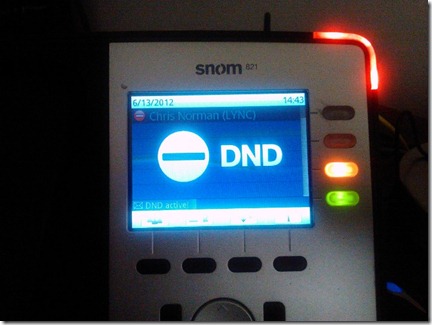 The MWI light is like a lighthouse. Its big and bright and can’t be missed. Although this is a pretty standard feature I haven't seen a phone scream this loud it has a voice mail. The light on the top hand corner will light on missed calls as well but the message light down lower in the phone will only light with a voicemail message. 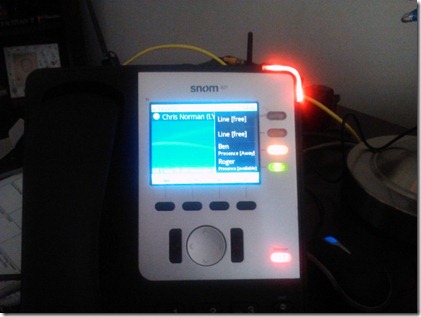 If you haven't noticed already but midway down the phone LCD are two lit keys. This is unique to the SNOM phones that you can set presence watchers for people in your buddy list. Here I am watching Ben and Roger. While I am not about to really care what Ben and Rogers presence is all the time this is especially handy for admins and managers. The presence states have three colors which are red(busy), Orange (away) and green (available). I guess you could say its speed dial on presence steroids 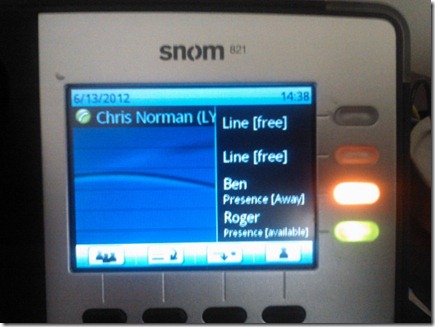 The presence function keys are really easy to setup straight from the phone interface. No need to hit the web interface. Below is a photo of setting up presence on the function keys. What I  also like about this feature is that when the Fkeys are pressed it opens the contact card so I can access all their contact details to call. 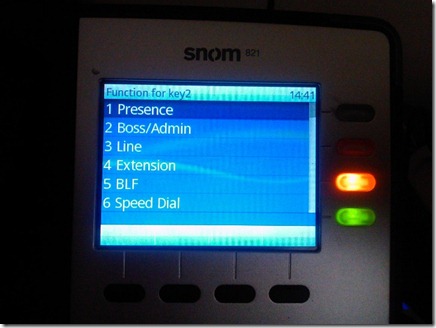 Figure 6: Setting up the function keys for presence.

Figure 7 has a couple of cool points. The most obvious is the call stats including the codec in use. This is simply accessed by pressing the message key mid call. This is really cool but not unique per say as other vendors also do this but I thought I would still call it out. The second thing is the messages listed below it. It has a missed call message I haven't accessed yet which is also why the MWI is still lit. 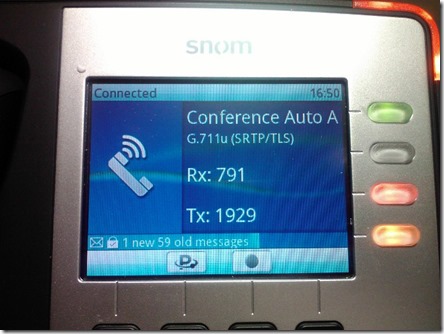 The last thing I will mention is the ability to change status from the phone. This is also available in the Aries devices now but I like the way its presented in the SNOM device. 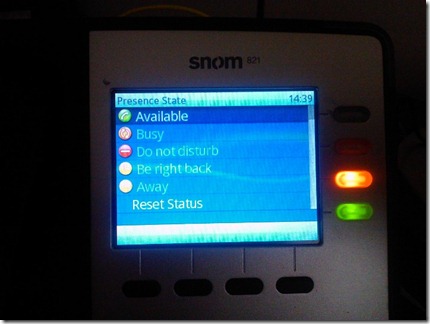 Figure 8: Updating presence from the phone.

As it stands today the one feature I feel is missing is calendar integration on the phone interface and the join meeting experience. I am sure though that this is something SNOM is looking into (I have no roadmap details this is just a guess). Like I said this is currently pre-RTM and I did see improvements between the pre-release software I tried. Even without calendar integration this is still a great take on an integrated Lync compatible IP phone.

Overall though I think SNOM have done a great job addressing features that I have heard customers mention they would like to see in a device. I am looking forward to what they come out with next.

As most of you know I post pretty regularly around issues concerning Lync 2010 and Cisco. In fact, it is the most common interoperability scenario I come across by far. Well I decided to put together all my posts in one document. Not sure if anyone will download it but I want to do something a little different. Its in a Q & A format.

I have posted it here on my SkyDrive:

Let me know what you think if you download it.

I come across this issue sometime ago. I just wanted to get down the particulars so it was easy to find. Hopefully this might help someone else running into this issue.

As the KB article below describes a 10 second timer began working for the OutBoundRouting Component to allow faster recovery from gateway failures. This was implemented during the CU4 update process. The Mediation Server is expecting a Session Progression message before the 10 second timer expires.

For most partner gateways this requirement is not an issue and most will return a session progression message regardless of the actual state of the call in progress. Whereas other qualified gateways (in my case it was a Cisco ISR) will only send a progression message back after the PSTN carrier or PBX has acknowledged call progression. In the case of International calls, calls to cell phones etc, carrier acknowledgement can be more than 10 seconds. This does cause call failures in cases where the 10 second timer expires.

You can change the 10 sec timer. The file which has the configurable parameters is 'OutboundRouting.exe.config”. Normally it is not supported to change the values in this file and unless your experiencing issues this value should not be altered . The file can be found on the front end server:

10000 represents 10 seconds. Most deployments should be happy with a value of 15-20 seconds. See Example below for 15 seconds:

You will need to restart the front end service after the change for the new value to take effect.

This is a work around. Future CU updates may in fact change this value back or alter this value, so its something to be aware of when performance maintenance upgrades.