If you happen to be paying attention last week on Twitter you would have noticed that #csummit was a trending topic. 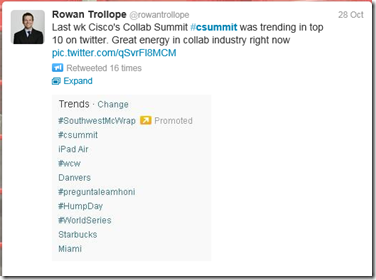 The Collaboration Summit had lots of great news coming out around Cisco’s Collaboration portfolio. Below are some links to latest and greatest info. I have included some general press links but there are a ton more.

Why I am using a PC again.. iPad wins over Surface RT and the Jabber bright spot

Some of you may remember that when I changed jobs I also changed OS systems, switching to a MAC. Well I am now switching between both MAC and Windows regularly which actually turns out to be a positive thing, let me explain. MAC’s coexisting with PC’s is becoming more the norm in most enterprises it seems.I have very few companies I work with that don’t have elements of both in their organizations. So using and understanding both has been a big learning curve for me but at the same time its helped me understand the different issues this brings.

A few things I learned in this experience are Office on a MAC is terrible (no really, just terrible), there is no great Visio substitute on a MAC unless I want to pay for it myself (not happening, I am cheap), and the constant Windows updates being one of the reasons I tried so hard to move to MAC still bug the crap out of me. In the end some of the important stuff I needed to do ended up on a virtual PC running on my MAC which worked but I felt it was ruining my MAC experience. So I settled for second hand PC hardware . I am using my PC as a desktop work machine and all mobile requirements I have are on Apple devices. The PC has some double duties for demos as well when required. Overall though this seems to be working really well. It’s a lot of devices to manage but considering my role I have some unique requirements which makes it somewhat of a requirement to work with and understand different platforms.

BTW I am writing this on a Windows 7 PC and am just about to reboot with another 59 updates. sigh..

Okay, 2 reboots later and I am back.

To be fair it’s a new build on my PC but in saying that I have updated this PC more times in two days than I have my MAC and iPad (iOS 7 upgrade included)combined in three months. Just saying.

In all of this I have found a new admiration for my iPad which I do love. iOS 7 certainly added some good new features which make it easier to multitask. My Surface RT basically sits on shelf uncharged, unloved while my iPad goes with me everywhere even if I have another compute device. Outside of the keyboard on the Surface RT which was handy the iPad (with a Logitech BT keyboard) is a superior device or maybe I should say eco system. The biggest issue with the Surface RT (and Windows Phone for that matter which I still own) is the lack of apps, hence my eco system reference. There were also a few performance issues I encountered with the Surface RT but at the end of the day lack of apps is still the main issue. Surface Pro probably would have been a better device since it can load legacy apps but I don’t have one and therefore I don’t care to go there. iPad wins for me and I can see clearly now why enterprises are choosing it.

Now with all that said I did use my Surface RT quite extensively when I worked at Microsoft. This was mainly because nearly all the apps I used were Microsoft applications. Lync, Skype, Office etc. So if this is your world it is possible to deal with Surface RT even with the app choice limitation. The problem I found was once I stepped out of the Microsoft applications choice was pretty limited. When I was not working I was actually using an iPad. It was my dirty little secret. Merely because the apps I liked were not on the Surface RT. Even reviews of the newly released Surface 2 mention this in nearly everyone one I read. It’s a real issue that Microsoft will need to address for real success on either Surface or for that matter Windows Phone.

With iPad the only limitation I have found is the lack of Microsoft Office apps (not exactly a surprise) but there is a work around for that. IOS 7 brings the Apple productivity apps for free. Although these aren't the equivalent of Office they are good enough for light work. I can envision lots of different job functions getting away with just an iPad and the right apps. There is no denying that BYOD is at critical mass. An IT support model where the user buys their own device and supports it. Basically you have just outsourced OS/application updating and device support to Apple or Google (didn’t want to leave Android fans out in the cold). What company wouldn’t in some manner think this was attractive? I can certainly see in the future where a company just has a compute allowance for users. I can remember early attempts at this by some companies back around 2005 but I see it as more achievable now.  I have not run into a large company doing this yet but I am sure they are out there or will be soon.

Anyway, these are my thoughts and pains of dealing with multiple OS’s and devices.The bright spot in all of this has been Jabber. Across all my devices I have had the opportunity know to give Jabber a solid workout. Jabber focuses more on the personal side of communications bringing together devices and software for the end-user while having deep integration into WebEx for web conferencing. While I know a great deal of you will argue every company wants everything in one application, practically this is not always optimal. This is due to the large variation of features that both personal communications and conferencing encompass.Having come from Microsoft where Live Meeting Service is still often used for larger events instead of Lync, it proves to me that just one application tied to one service delivery infrastructure can be a limitation. Jabber provides a  solid middle ground of tying services together for the end-user whether the service is coming from the cloud or on-premise. This is really cloud on your terms for communications which is the flexibility companies are looking for and has given me a new perspective on delivering UC services.

BTW If your interested in signing up for early releases of Jabber here is the signup on Cisco communities: 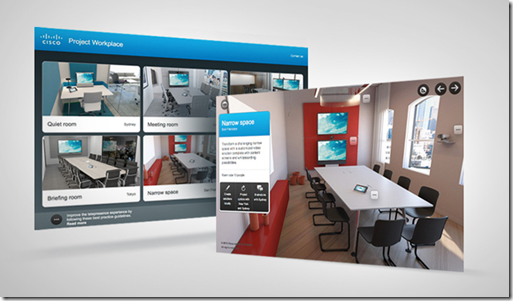 It also has a section on best practices to help with things like lighting levels and reverb. 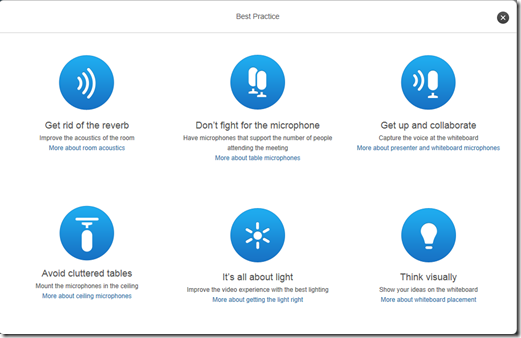