The Windows 8 and Surface launches have finally come and I am glad to say there is Lync news as well. The new Lync App is available for download from the Windows Store.

Funny, I don’t remember seeing a Cisco Jabber app in there. Oh that’s right, they want to limit your choices to fit a Post PC marketing campaign. I got one thing to say, “Surface anyone”:)

I remember when I first saw a demo for the BCC950 and thought that is really cool. A low cost solution that is simple and Lync compatible. I liked the device but wasn’t so sure if it was going to be all that impressive at around $250 dollars.

Well, I have been using this device (pictured left) with Lync 2013 for the last few months and so far I am impressed. The pan, tilt, zoom functions work great with the remote and the camera resolution with 1080P works well with Lync 2013’s new HD capabilities. The speaker phone functions really well and for the most part I am using this as my primary audio device at my home office. I rarely pick up my headset unless required. I had forgotten just how handy it is to have a speaker phone in my office. Only problem is my wife doesn’t know when I am on the phone if she doesn’t see me with a headset on. Looks like its time for the presence light:)

One thing that Logitech did a great job of is thinking out of the box for a USB device and adding a PTZ camera to a speaker phone. Had this been just a speaker phone on its own or  Just a  PTZ camera it would have been pretty lame. But the camera combined with speaker phone makes it worth taking a look at. In fact Scott Hanselman from Microsoft has come up with a great idea and created some software to do remote PTZ from another PC. His project called the SimpleAutoAnswerVideoKioskWithFullScreen is a great example of both Lync’s development capabilities paired with this neat device.

Below is a screenshot of me in a meeting with the BCC950 using the new spotlight feature in Lync 2013. The spotlight puts the video focus on one speaker. It’s a great feature for training sessions or in my case I am create a one person show which could be used as a training vignette. I am using it to demo the HD capabilities of the camera without having smart cropping trim it down. In case you didn’t know smart cropping is another new 2013 feature that removes the outer edges of a HD picture to preserve screen space when using multiparty. But more on that in another post. 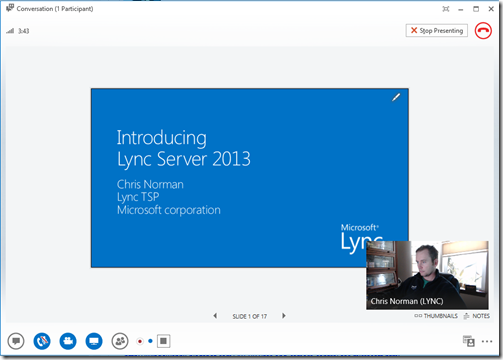 Below I did a short video. Its kind of lame but I am messing with the PTZ and you get an idea of the noise it generates during a conference. It nothing to bothersome just something to be aware of. Don’t expect to be super excited by the video its basically me in sweats, working from home not speaking but the recording will show some of the video capabilities of this device used in a Lync 2013 recording.

Overall this is really a great device for $250. I know a number of companies I work with have test devices and so far I have had positive feedback from everyone. With the new HD capabilities and emphasis on video in Lync 2013 I am sure this will be a popular low cost HD solution.

Here are some quick resources if your looking for information around Lync 2013 in a VDI environment:

What's great about Lync 2013’s upcoming support is the ability to choose the VDI you are working with. You aren't locked down to one virtualization or hardware vendor.

Recently I came across an interesting question around why one would want to enable Siren using the command Set-CsMediaConfiguration –EnableSiren. By default this is set to FALSE. So while this seems like it might be handy to enable, if you have applied CU4 to Lync 2010 it really isn't.

With EnableSiren set to TRUE, three codecs will be offered to Lync by the mediation server. The codecs (in preferred order) will be Siren (wideband is always better), next G.711 (higher quality than RTA-NB), and the least-preferred is RTAudio narrowband. Since the client supports Siren and there would be little reason to switch to one of the other codecs, you can pretty much count on Siren being used for the duration of all non-bypass PSTN calls.

Of course, there will be higher CPU load on the mediation server as it transcodes Siren to G.711 but that’s the price of lower-then-G.711 bandwidth usage on the WAN.

This setting might have made some sense to use from Lync Server 2010 RTM through Lync Server 2010 CU3. In that timeframe, the only thing that would have kept Lync from using G.711 for PSTN calls was if there was a CAC bandwidth policy in place. If the CAC is not configured but wanted a lower-bandwidth codec to be used by default for PSTN calls, it is possible to enable Siren. (RTAudio narrowband was always an option but Lync only switches to it mid-call if congestion was detected.)

In Lync Server 2010 CU4, a round-trip-test between the Lync client and the mediation server was added. If the RTT is greater than a value expected on a LAN, the client will assume a WAN connection and switch to RTAudio narrowband to save bandwidth. RTA-NB requires less bandwidth than Siren. So best practice is to let RTT do its work  enabling the us of RTA-NB or you’ll actually end up using more WAN bandwidth than necessary.

For more details on CU 4 update please refer to the KB article below:

These behavior changes were brought about due to feedback received from partners and companies deploying Lync. By enabling Lync to dynamically sense network conditions, Lync is not reliant on network components to make decisions. This enables companies to use any network vendor they see fit or is the case at most companies enables a multivendor network.

Thanks to Doug for the info in this post, a true Lync Master.

What are you waiting for? Register already!