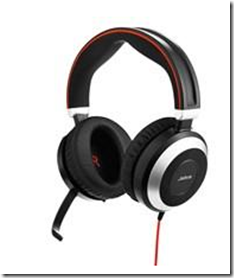 Its been a while since I have done a device review and to be frank I haven’t been watching this space real close of late either. My interest was peaked a week or so ago when I saw a tweet from Jabra for the Evolve 80 and subsequently saw one in the flesh  not long after. This isn't your average UC headset that’s for sure . It is great to see Jabra blurring the boundaries between enterprise and consumer markets. With the growing popularity of the Beats by Dr. Dre (may be its just in the NFL, sorry Bose) it seemed like Jabra was just trying to get in on the bandwagon. After spending a little time with the headset I think they have done enough to offer some unique features that make it a little more cube and UC friendly versus just a great audio headset that just happens to be able to work with a UC client.
I never thought of adding some of the new trends in active noise cancelation to UC/voice headsets but its kind of obvious now that I have tried it. Only the Evolve 80 boasts active noise cancellation in the Evolve product line. The other headsets in this line have passive noise cancellation. Its been proven that ANC can have a positive effect on concentration by removing distracting noise so it makes sense that using them in a cubical environment could have some benefits to the wearer. I can’t say that I have conducted any precise experiments to see if there is any real credence to this but after being on calls both video and audio only it does seems easier to stay focused. Of course Jabra is using this with their  “Reclaim the Workspace” marketing along with some other unique features of the headset. 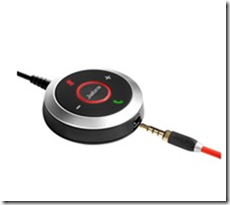 One of the features of this headset I seem to be using a lot is the ability to disconnect the USB dongle and use the headset as a more straight forward audio headset with the 3.5 mm jack. It really makes the headset much more versatile. The call control functions work for both Jabber and the DX series of endpoints.
So far I have been using this headset with my DX80 and Jabber on my PC via USB and listening to music on my MAC using the 3.5 mm jack. While the DX80 has some great audio capabilities to limit distracting calls using intelligent audio technology, that technology only works for the receiver and the sender still has to deal with the noise surrounding them. The Evolve 80  really helps limit that outside noise distraction with the ANC. Finally a way to cut out my 5 barking dogs when the mail man comes to the door. That’s right, 5 dogs.
One other feature I think that is worth calling out is the call presence indicator on ear 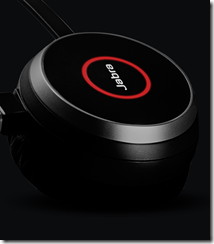 piece. Although integrating a call indicator into a headset is not new the way Jabra has done it makes it much more obvious than other attempts I have seen to date. You can also manually turn this on. Sort of takes Do Not Disturb (DND) to a whole new personal level.
The only negative I have found so far is limited to the size of the headset. It does take some getting used to for sure.If your used to a super light headset then this will feel heavy in comparison. I am a big user of double ear headsets for UC so wearing a headset that covers both ears wasn’t a big change for me but others may prefer the more slender and single ear models of the Evolve series which BTW probably also weigh less. The 80 also covers the whole ear which some people may not like. I personally think its great. I can’t wait to try it out in a cube environment and make my fellow Cisco employees jealous of my inner silence:)
Lastly, keep in mind this is a super sturdy headset that is made to be high quality both of build and sound quality and the cost reflects that (around $250-300). But as a wise man once told me you get what you pay for and if your wearing a headset 4-5 hours a day the higher cost is well worth it. I have used headsets that sit on the ear versus around that after a certain amount of time can be painful to wear after prolonged use. The 80 does help with this by surrounding the ear and not on the ear.
So if you get a chance to try out the Evolve 80 it is well worth it. Just remember its not your average UC headset.
VoIPNorm
2 comments:
Email ThisBlogThis!Share to TwitterShare to FacebookShare to Pinterest

Firefox has now added support for OpenH264 in its latest release as part of its efforts for WebRTC support. You should automatically receive the update.Congratulations to the Mozilla and Cisco teams working on the project. This should help to open up WebRTC to more us cases across the board without the need for a plugin.