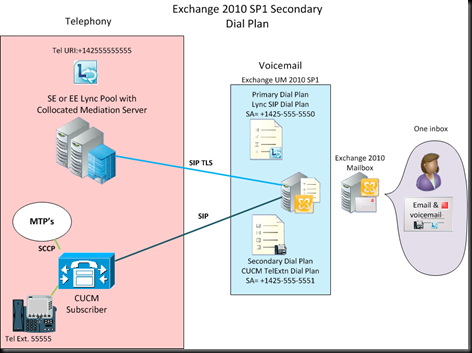 5 comments:
Email ThisBlogThis!Share to TwitterShare to FacebookShare to Pinterest

Ever lost a conversation down in the system tray. Pretty annoying. Well now there is an app for that! The Lync Tabbed Conversations is a free download that PC users can use with their Lync client.

I really like this application. I ran it to begin with just to try it out and see how it worked. After restarting my PC I choose not to start the application up again and go without. What I found was I hated having all my conversations in different windows all over the place. It was much neater and simpler to have them in the one window all the time tabbed. Its pretty easy to remove a conversation from the application and still have it in a separate window though which is great feature. This feature is especially helpful when your in a meeting and sharing content but still need to see other conversations at the same time. 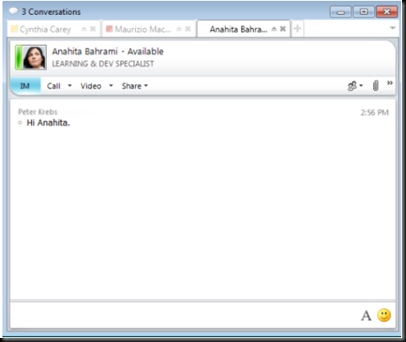 I believe this is a must have application for heavy Lync IM and conferencing users, like myself. Although it’s a separate application it doesn’t seem like it once you start using it. Windows automatically transfer to the Tabbed interface even though they first flash up on the screen independently, which at first seems confusing till you know what to expect. Out of all the plugins for Lync I have tried this is by far the one I have used the most.

Visit the Lync Adoption site to get more details and download this free application.

Blocking Calls in Lync Based on Caller ID

Sometimes you have to rely on others when you don’t poses the skills your self, well maybe this was more like hope someone comes to my rescue. This week I got a question about blocking caller ID. I knew what to use to solve it but didn’t know how to write the code. Luckily for me Keith from Got UC was able to help me out. Below is a MSPL script for blocking calls in Lync based on caller ID. Keith has also posted the code on gotUC as well.  I have also created a link to my SkyDrive so people can download it rather than copy and pasting from the post which can screw the code up.

One thing you will notice about the script is that you will need to create a text file called BlockedTelephoneNumbers.txt. This file contains the blocked telephone numbers with two columns. One is the telephone number and the second is the action which in this case only requires the word “block”. Also static="false" is set which means when you make a change to the script it will reload it so no need to do any manual restarts of the application in Lync.

This is a pretty simple script that only blocks on the inbound caller id and does no other checks. Hopefully you only block the right numbers. You can also add some checks to this script. Only invites from the mediation server is one that comes to mind. This would block only calls from the PSTN and would avoid the script checking every single invite against the file which could get quite large.

So the potential to add some more checks and balances are possible but this script presents a great base to build a more complex call blocking process.

MSPL scripts are a great tool. If you want to learn more check here. If you have a script you are willing to share let me know. Here is another example of MSPL use here.

Well its finally here. The Kinect for Windows SDK beta has been a while coming since the first Kinect was hacked just a few days after the initial launch but it is finally here. Its great to see Microsoft Research listening to the community to provide this free SDK.

My hope is that a UC developer out there somewhere sees the potential for the Kinect in the UC space especially with Lync. With it’s a ability to track sound and depth perception I have to think there is an application tie with Lync to take Telepresence to a place its never been before.

This SDK includes the following features (From the download site):

Here is a great new free tool from Microsoft that plugs directly into Excel. Although this isn’t really a UC product as such I still find it useful and interesting for helping run my blog and other social network activities. In the example I did below I did a simple hash tag search on #lync and #jabber to see which of the two is generating more interest on Twitter. No surprises for which one came out on top.

With the recent interest in social mining of sites like Twitter I though this was an interesting free tool and worth talking about.

With this FREE add-in, you can:

You need to download the Twitter plugin for Excel as well as Power Pivot for Excel which are both free. 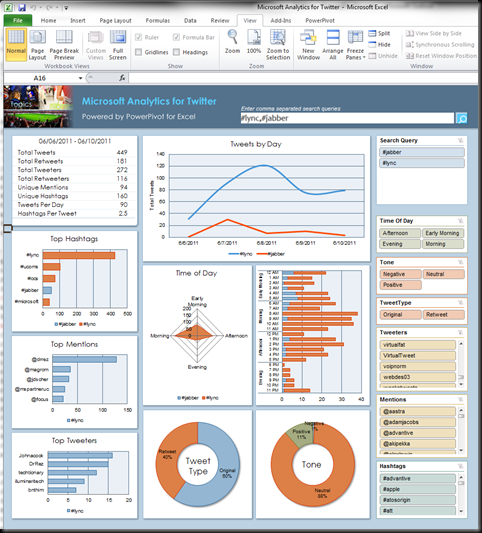 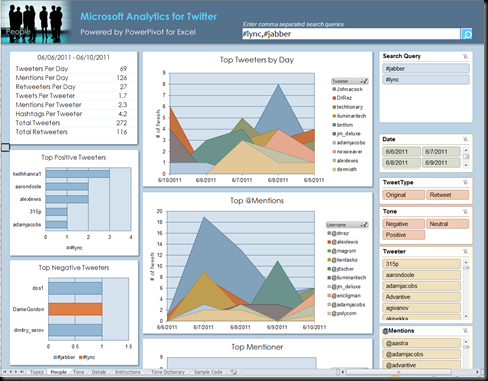 There has been a big uptake in interest around Microsoft UC focused User Groups recently. The Lync resource page has been updated to include a directory to help folks find a group in their location.

If there is not a group in your location may be its time you started one!

Also check out the new community page to see the latest Lync related activity on the web.

Back in OCS R2 when Microsoft released adoption material it was a great tool to have in your back pocket to help with rollouts. With the release of Lync it has been taken a step further with a complete web site focused on adoption. The site has a collection of great tools for a Lync rollout including workbooks, tools and apps (which I will talk about later). I have a favorite saying in, “Organizations over estimate the administration involved in Lync and underestimate the effort required for adoption services and end user training.” Its not that you need hundreds of people running around training people but organizations have a tendency to overlook what's required for end user adoption. Not everyone is a super nerd and picks up UC or Lync as fast as us IT pros.

The tools on this site will go a long way in helping organizations get the biggest bang for their buck as they rollout Lync. I really like the workbooks and the table that describes who will be a high and low touch user for training. Although this will vary from organization to organization it’s a great starting point.

See the link below:

I wanted to make special mention of the Tools and Apps section. Each of the Apps adds value and a certain cool factor. Below is the complete list of Apps available. Most of them take advantage of the client API’s in some respect.  One of the applications in particular is the Lync Custom Intranet Site. Although its not really an app as such it is a great adoption tool. It is a prebuilt help site that you can add your own content to and deploy internally at your organization. A great way to get end users the training they need to make a rollout go smoothly.

I will be going through some of the apps  in more detail over the next couple of weeks.