You may have noticed last week a bunch of announcements coming from Cisco during our Collaboration Summit.The major ones were the release of Project Squared (which includes the partnership with Box) and also our new immersive system the IX5000. Below is a small collection of a few resources from that event as well as an interesting video of a WebRTC call from Project Squared running in a browser to a DX80 video endpoint transcoding free.

If your interested in trying out Project Squared you can sign up for free and start collaborating right here : https://www.webex.com/projectsquared/ . You can currently get to Project Squared through a Web browser or apps running on iOS, Android and MAC with Windows coming in December (date is public from Project Squared website).

A couple of people have asked about what to use as a background screen for their TelePresence endpoints from my “So you want to deploy UC?” post. It’s a great idea to use this real estate to educate users and give helpful tips. Unfortunately the idea for doing this is one I borrowed from a colleague but I think heard someone say once the best ideas are borrowed/stolen. Anyway.
Below are a couple of different versions of the same thing just updated depending of the version of TC software your using on a Cisco TelePresence endpoint. I actually did this in PowerPoint and then saved them as a JPG. I used the Web UI o the codec to get screenshots of my touch panel. Taking screenshots of your touch panel varies depending on your software version your running so take a look at my blog post on the subject to learn more. 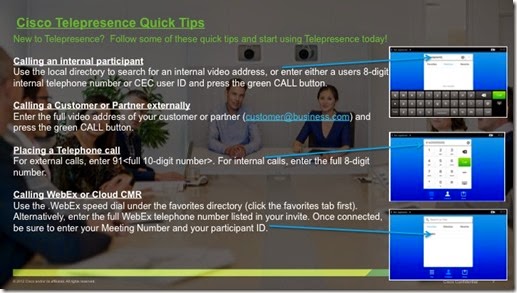 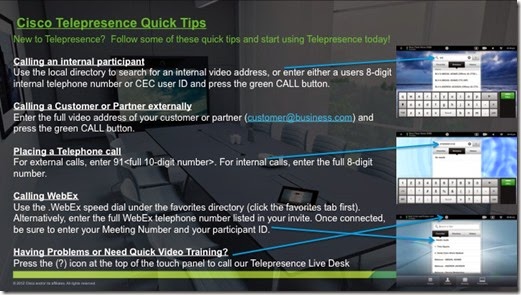 Once you have created your master piece then its just a matter of uploading it to the TelePresence codec. Something I have noticed is that depending on how you create and save the image does affect how it looks once you get it on the screen. Just make sure to keep the image quality good. 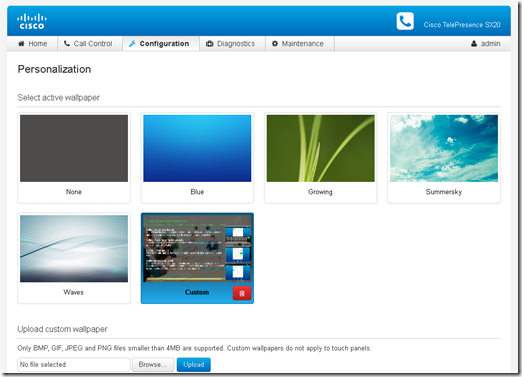 As versions change this is something you will want to stay on top of though and make sure your background is still relevant to the version of software your running on your codec.
Update, Adding QR Codes : Again another good idea from a smart friend. I basically don’t think of anything myself any more. Adding a QR code is great way to add a touch of BYOD to your background with a link to internal or external help for video users. Creating a QR code is dead simple and makes it super simple for users walking in with BYOD to get to stuff.
Creating a QR code blog: http://blog.hubspot.com/blog/tabid/6307/bid/29449/How-to-Create-a-QR-Code-in-4-Quick-Steps.aspx

I used http://qrcode.kaywa.com/ to create a QR code because its free for the static service but they have more advance features to track usage if you want to pay for their service. This just links to http://voipnorm.blogspot.com but it can be any website.

A great example of using a QR code is linking it to a complimentary application that users can use on their BYOD device with a video endpoint. The one to the right is for Cisco Proximity on iTunes. A really simple idea that users will like. Of curse if you worried about the URL changing you can also make dynamic QR codes where the URL can be updated but the code stays the same.
Here is what it can look like: 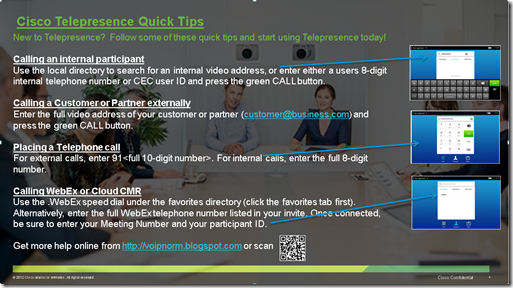 If you would like a copy of the background PPT you can get it from here.
VoIPNorm
1 comment:
Email ThisBlogThis!Share to TwitterShare to FacebookShare to Pinterest 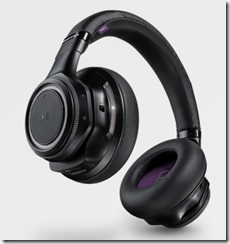 After reviewing Jabra Evolve 80 headset last week, Plantronics makes a come back this week with the BackBeat Pro. While the Evolve 80 is somewhat of a blended consumer/UC headset the BackBeat Pro as the name implies is all about music with UC a far second. Although the focus of the BackBeat Pro is the consumer market its worthy of a review because it does have some great features. It may not have UC specific features but with tradeoffs in other areas it still makes a great headset.

In reviewing the BackBeat Pro I went and had a look at some other reviews on the Plantronics website. I was not surprised that it rated pretty highly among consumers because of two reasons: 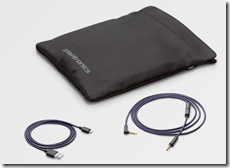 The headset also comes nicely packaged with a nice storage case. It’s a pretty significant investment of around $250 for a headset so its nice that it comes with a case to protect it. There is also has a USB cable and a standard 3.5mm cable. The USB cable is only for charging and updating the device. I like the fact you can update the device software and turn features on and off with it. A Mac version of the update software would go a long way. Especially considering the popularity of Apple devices among the devices target audience age group which is probably the 30 and under. 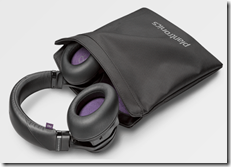 Another area the Plantronics has done a nice job is in the use sensor capabilities. As an example when I put the device down it automatically pauses my music or when I pick it up it answers a call when paired with a cell phone. Its great to see headset manufactures thinking about the end user experience. Even software updates on this device were pretty simple. The Plantronics website did a good job of guiding me through the process to get the latest software on my device.

There are a lot of positives about this device and so far I have only found one major detractor. There are basically no UC focused features. Yes, it will work with your favorite softphone application to make calls because it has a microphone but that’s basically about it.Most advanced call control features are not there. Although Mac compatibility will vary by softphone anyway depending on API availability, Windows it’s a big miss. In comparison to the Evolve 80 which has really thought through the UC experience the BackBeat Pro really misses in this area. In saying that people might be attracted to the Bluetooth capability and over look the lack of UC features and just make do with what it has to offer. Hopefully this might be something Plantronics expands on down the road with a software update.

The big positives for the BackBeat Pro are sound quality, Bluetooth with NFC, ANC, Use Sensors  and battery life. The only negatives are from a UC perspective with the lack of integration into your favorite Windows or Mac UC application. Despite the BackBeat Pro’s tradeoffs its still a great headset that I have enjoyed using, now back to Metallica…