I have also expanded this post to include the configuration required to add remote alternate media IP to a remote site trunk within Lync Server 2013. I thought this was an important configuration to highlight as it is a little bit hidden. Setting the alternate Media IP in Lync Server 2013 requires the use of PowerShell which is new for 2013. For those not familiar with what this is here is a quick overview.

For those new to CUCM and Lync interop here is a post I wrote way back that talks a little about the use of MTP’s with OCS. Little has really changed in relationship as to why you need them and in reality all VoIP vendors have a Media Termination Points of some description in their environment their just called something a little different. As it relates to Lync, Lync has no awareness of MTP’s location or IP address of another system. So for CUCM that has defined a SIP trunk and a set of MTP’s that can be either as software on the CUCM or on a router, Lync has no knowledge of this. Hence the alternate media IP setting under the Lync gateway configuration.

Out of the box Lync assumes that the media and signaling path for a SIP trunk are one and the same just like a gateway. If you have not located the MTP on CUCM Lync has no knowledge of this and by setting the alternate media IP setting in Lync, Lync can effectively ensure that media bypass will work in the correct manner because as we know CAC and media bypass are determined through sites and subnets.

Okay, now we are done with the basics lets move on.

Reasons for Multiple SIP trunks to the same CUCM cluster/Subscriber

There are a couple of reasons to have multiple SIP trunks between Lync to the same CUCM subscriber or cluster. These are:

Previously in Lync Server 2010 the main hurdle with configuring multiple SIP trunks to the same gateway or in this case CUCM cluster is the ability to create multiple gateways with the same IP address in the Topology Builder. The work around to this issue was to use DNS  records that resolve to the same IP address. This was a pain if you had lots of remote sites. Imagine managing 150 DNS records all pointing to the same object. Pretty easy to mess up. Well this has improved with Lync Server 2013 and is no longer a requirement.

In my example scenario I have three SIP trunks to my CUCM cluster but my focus will be on RemoteSiteX which is my new Branch site.There are four steps involved in setting up my new site and establishing the remote media termination points to allow media bypass to stay local in Lync. The Cisco UCM configuration really has not changed and so I wont be discussing it in this post. Just know for the remote site you will need to configure its own MTP with a Media Resource Group and List that needs to be applied to the remote site SIP trunk in CUCM. 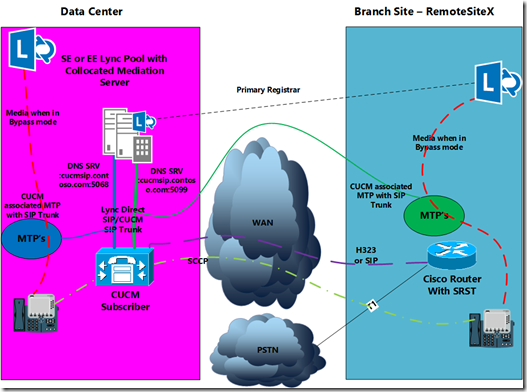 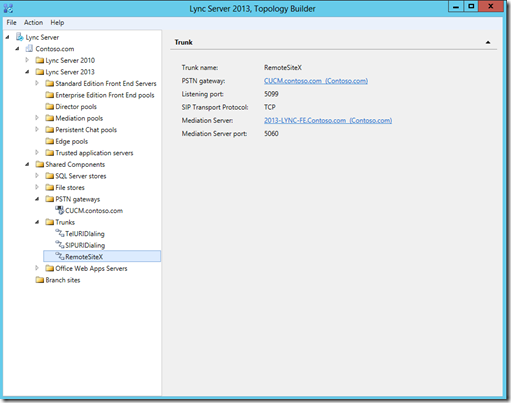 You will notice I have three trunks defined but only one gateway. This new setting for Lync Server 2013 makes configuration a lot easier to manage. While it still means you need to create multiple trunk objects you no longer need to create new DNS records for every new trunk. You may have noticed I have specified a different Port for the trunk. This is still a requirement and if you refer to my diagram it shows the same DNS record being used with different ports.

Step 2 – Configure the Trunk for Media Bypass in Lync 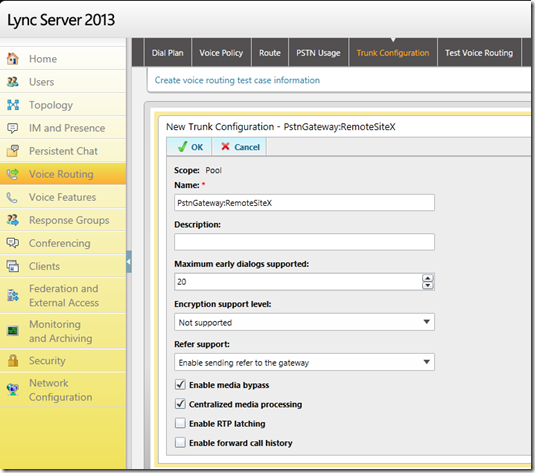 Now we can setup the trunk inside the Admin UI and enable media bypass. Pretty straight forward not that much has changed here. Take note: Centralized media processing is selected to enable media bypass even though we plan to use an alternate media IP. I have made the mistake of thinking this is not a requirement but it is.

This is where we start to add some new configuration. First step is to identify the trunk ID in PowerShell. You’ll notice I said trunk but the ID shows up as a PSTNGateway. Don’t be deceived. Lync builds a gateway object for the trunk because in essence the trunk is performing the functions of a gateway and under the hood it remains a PSTNGateway object. See PS command below:

Lastly we need to set the alternate media ID which is the remote MTP defined in CUCM. If you are setting the Alternate Media ID this should be done for all trunks defined under the gateway you are configuring.

If you have multiple MTP’s for the site, you only need to define one and Lync will work out the rest through sites and subnet to ensure media bypass will function correctly.

Once its all said and done you may want to verify your changes.

Hopefully this change in 2013 will make life a little easier for some of you out there.

This is a really common question which in previous versions was seemingly impossible unless you knew SQL really well. Well in Lync Server 2013 it’s a very different story and you can now use PowerShell to remove content from a room. I am just now waiting for someone to write a scheduled script to run this command with the right date set. If someone has something like this already written please let me know if your willing to share.

Removes all the content from a Persistent Chat chat room beginning with the oldest item in the room and continuing through the specified end date. This cmdlet was introduced in Lync Server 2013.

Lync 2013 iPhone and iPad Apps Released–Video on the iPad

So the good times keep on rolling with the release of the new Lync 2013 iPhone and iPad clients today. Below are some screenshots of the new client for the iPad. Names, URL’s and personal info are removed but you get the idea. I haven’t covered ever feature but really focused in on the new video and desktop sharing capabilities.

As with all the new mobile apps, even though this feature has always been part of the iPad client, we have the days calendar with Lync enabled meetings highlighted blue. When selecting a Lync meeting your presented with a similar screenshot below: 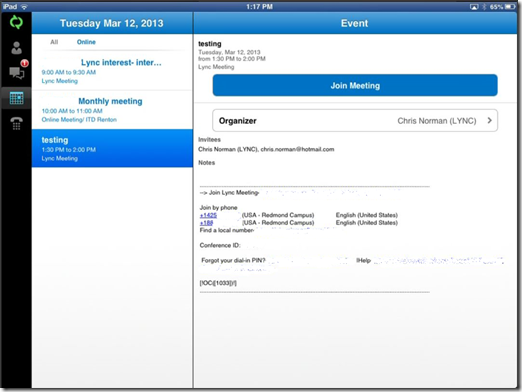 Once you launch into the meeting you get the active speaker listed in the screen: 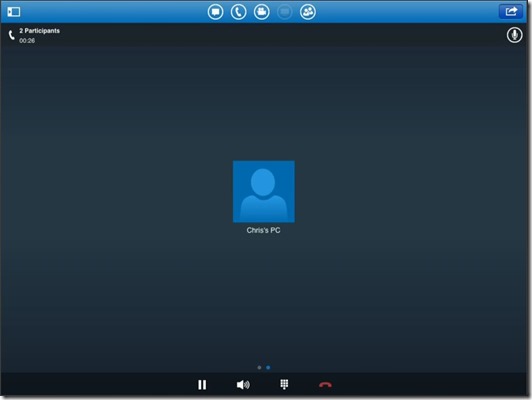 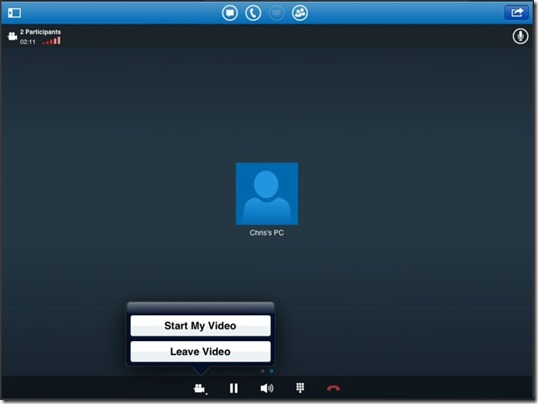 Here is the active speaker video with my preview from the iPad in the lower right-hand corner. The active speaker in this case in the Lync Web App I have running on my home PC (sorry you only get the side of my head) : 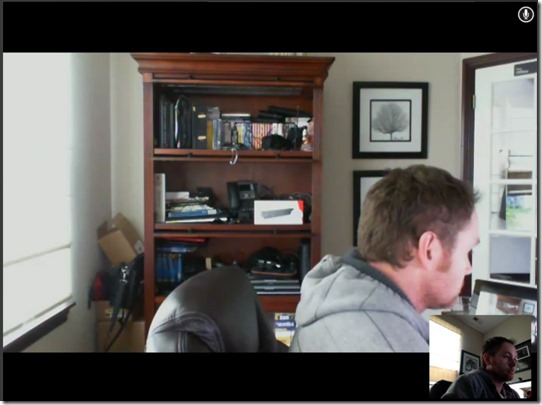 More video with the controls exposed: 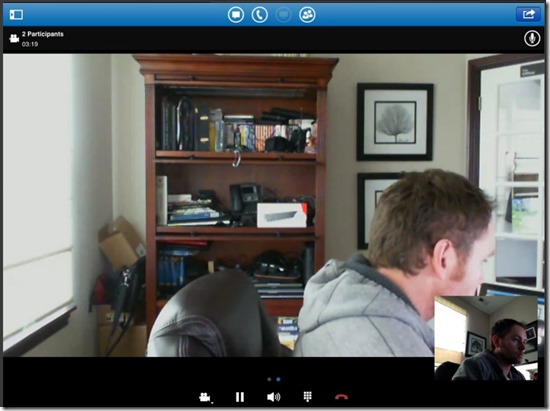 Desktop sharing viewing, this was generated from the Lync 2013 WebApp which by the way is also very cool: 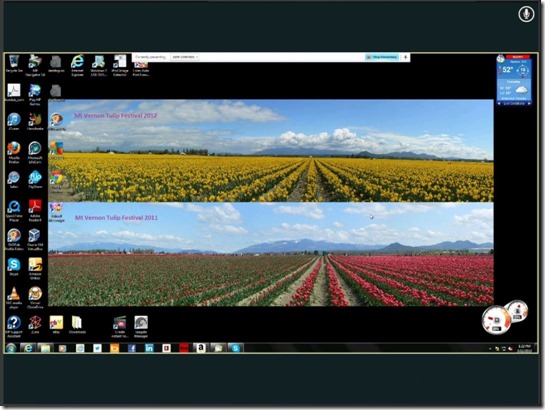 Switching between front and rears cameras is a easy as pressing a button: 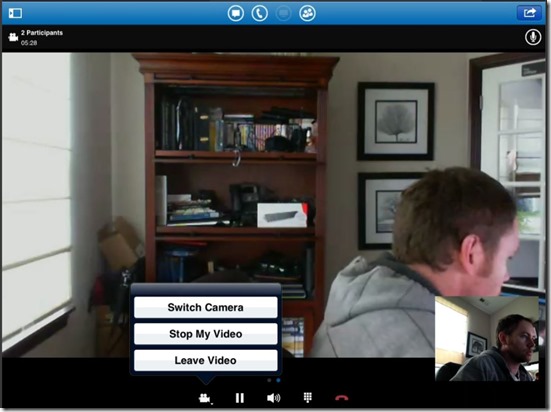 My preview has now changed to the rear camera: 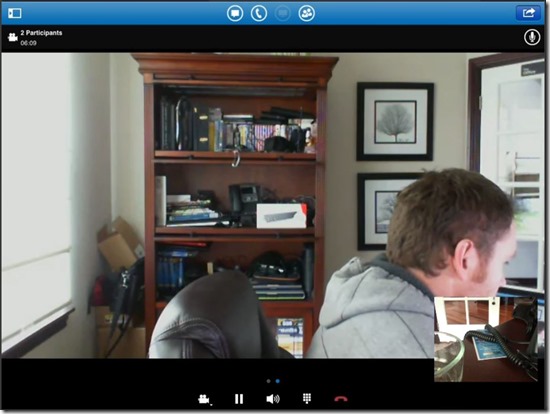 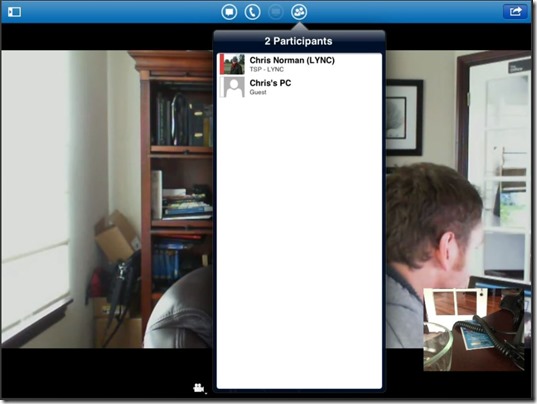 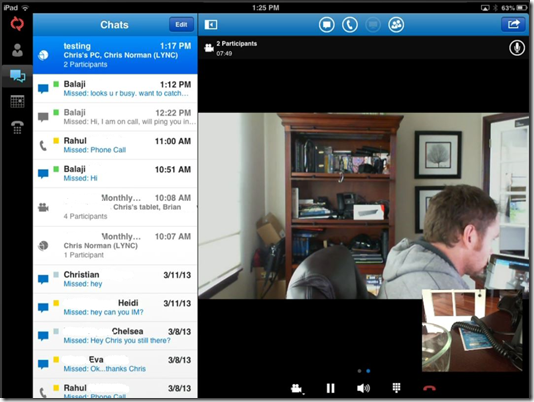 All my screenshots were taken during a single meeting occurrence so there is no need to restart meetings to change your view or any need to change apps (like some other vendors :-) )

For more info about the release of the clients see below:

Here are some other relevant blog posts and links:

12 comments:
Email ThisBlogThis!Share to TwitterShare to FacebookShare to Pinterest

The Lync 2013 Mobile App is finally here. With that comes some cool new features namely voice and video. I have been testing the WP8 Lync 2013 Mobile App on my HTC 8.x WP for a little while now and I think people will really enjoy the new features. Video over Wi-Fi and LTE works really well. The screenshots below were taken while I was on my home Wi-Fi but LTE works equally as well. I was using my home PC to generate the main video feed via the Lync Web App in a meeting and I then joined from my WP8 on Lync mobile. So even though you may see my face in both camera views they are on different devices that are part of a meeting.

The top shot (excuse my messy hair) is full screen landscape view and the second shot down is with the call controls available. With the camera controls you have the ability to switch between front and rear cameras on the phone. The one PIP down on the right hand corner is my rear facing camera pointed at my laptop. 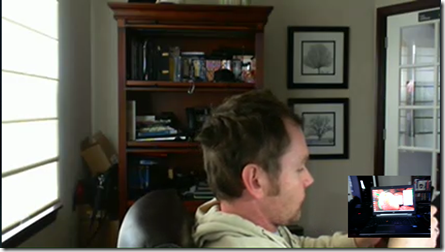 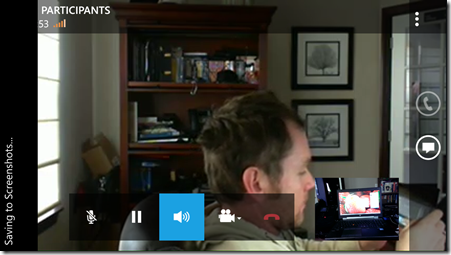 Below are some more screenshots of the meeting join experience (I had to sanitize a little to hide names, numbers and URL’s but you get the idea). One of the great new features is the in app calendar view for the day. So rather than having to swap between apps to join a meeting it all occurs within the Lync 2013 Mobile App. Lync enabled meetings are highlighted in blue.The video is in portrait mode along with the camera controls for starting and stopping the camera and switching camera’s. If you follow along with the screenshots this gives a pretty good flow of what a scheduled video meeting might look like.

I didn’t want to go through every feature and there are some screen shots available in the Windows phone store for other features. Also the Lync Team has published some more screenshots of new iOS Lync Apps here which are due to release shortly.

While this may sound confusing, from the user standpoint they will not be able to sign in with Lync 2013 mobile until you have the right pieces in place which means they will not see new features and buttons that wont function. So from an end user perspective this will alleviate confusion over what's supposed to work and gives admins some feature release control.Not something I am sure your users want but something that most engineers need to have to orchestrate the required configuration and ensure ancillary pieces like training and helpdesk scripts are in place. All the things that go into an enterprise grade service offering.

BTW, I used the native screen capture feature in WP8 to get the screen grabs above. Just press the 'Power button' and 'Start' icon together and briefly. You hear the camera shutter sound, and it's saved in the 'Photo' section in an album called 'Screenshots'.