Note:This is an unsupported configuration using a third party to plug in a video stream into Lync via the use of webcam drivers so use at your own risk.

Ever wondered how to stream mpeg or wma video files into a Lync meeting? Or how about using two webcams on the same PC with Lync? I got this question just recently from a company wanting to stream  prerecorded video through Lync to the masses over a Lync meeting. At the time I said no but stupid me should have realized where there is a will there is a way. This is not the most elegant of solutions such as using multicast or something more fancy dedicated to video distribution but it does achieve the desired effect.

Webcam simulator will add a virtual software camera to your operating system to allow you to play the recorded video instead of using your webcam. ManyCam can do the same thing but has a better user interface. Although on the main website it has some really stupid video effects that it shows as its main features it really has some better uses than that in my opinion. I have some snap shots below of a video I have playing during a meeting using ManyCam to inject a .wma file. 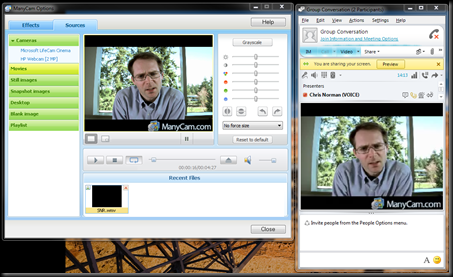 The virtual webcam is selected under the video settings in Lync. 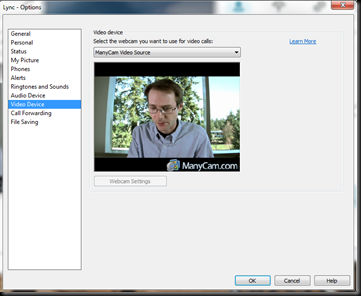 The ManyCam software also allows PIP as well so I can have another source used in the same video feed. In this case I am using a web cam as the second feed embedded into the main picture. 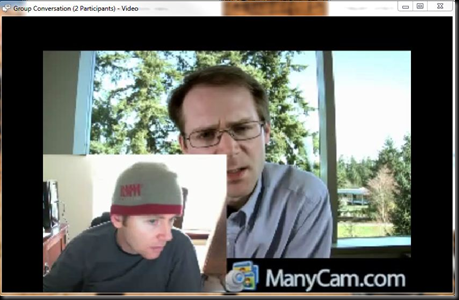 In this last screen shot I am using the ManyCam to integrate two web cams on the same PC into the one image that is feed into Lync. This is probably the most useful of all in my opinion because you might want a room view and then a focus in on one presenter. 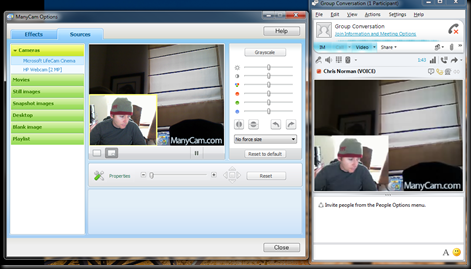 So far I have found two issues. Firstly is audio when playing prerecorded video. Its not a big issue since you can relay the audio from the playing recording back through a microphone into the meeting but I have yet to find a clean solution. The second is getting rid of the ManyCam inbuilt advertising. Kind of annoying but not something that would force me to stop using it.

I didn’t discover this great use of the ManyCam software but I sure wish I had. It is really cool and I can envision some people getting good use from using it.

Comments welcomed and please let me know if you have tried this or other web cam software to do similar things.

Update: The issue of the advertising was solved by John K who also discovered this clever use of ManyCam. Just unselect the ManyCam logo under effects. Easy. Thanks John. 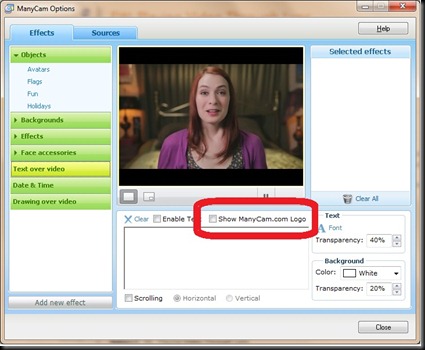