Polycom HDX Integration to Lync with ICE/STUN and TURN

So for those of you that read Jeff Schertz’s blog he recently wrote about the great Lync integration that has just been released with Wave 4 for the Polycom HDX and RMX lines. Native Lync integration is very cool and I am a big fan of what this can do. Even though Jeff goes in to some great detail there is one piece that I wanted to elaborate further that I think is a bigger deal than HD video and has been around for a little while now. 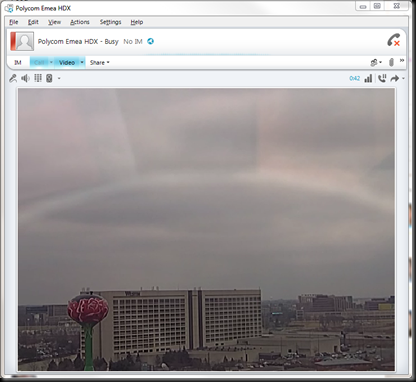 How is this possible you may ask? ICE/STUN and TURN protocols. Just like you would contact someone from a another organization using federation with Lync you can also do the same with Polycom HDX endpoints since they both support ICE/STUN/TURN and register as a native endpoint in Lync. This also means you can also use the HDX with VPNless remote access using the Lync Edge same as you would the Lync client for your own organization.

Lets take a look at a quick diagram. Below shows the ability to do federated video calls using the HDX.I have kept this really simple. I just want to highlight what is happening at a high level with the screenshot above. So in this case I have the HDX in my buddy list in Lync and I initiated the video call to the Polycom owned HDX device: 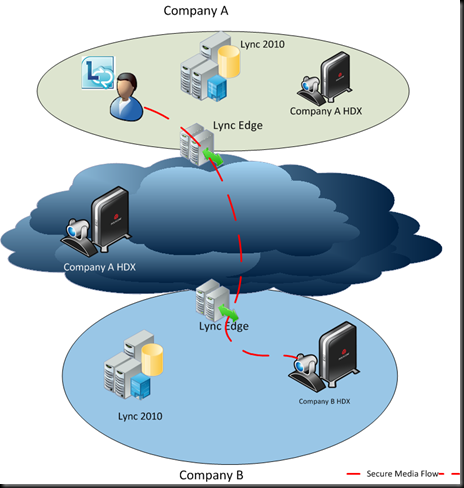 A similar scenario can also be achieved with remote access for a companies internal resources. In the diagram below the remote HDX of company A  is calling a Lync client from company A using remote access across the Lync Edge. The same can be achieved with the other internal HDX depicted. Seeing as both HDX’s can be registered as Lync endpoints it really opens up the ability to use the HDX’s as true Lync clients and utilize the Lync infrastructure. 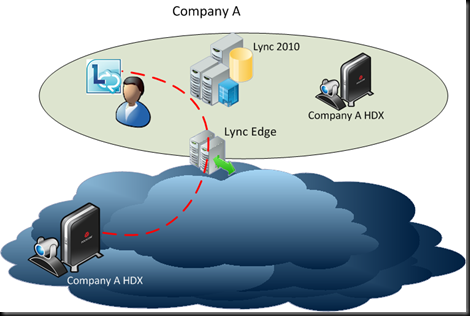 Why is this so important? I think for most companies infrastructure consolidation through integration is going to be huge. Requiring less infrastructure in your DMZ or on premise to provide seamless video capabilities for remote and federated users shows the real value of the Polycom Microsoft partnership.