This week I thought I would change things up a bit. I usually talk about UC but as more and more social networking becomes in twined in our lives I thought I would talk a little bit about my experience with Twitter. In particular, what happened when I added Twitter into my blog. 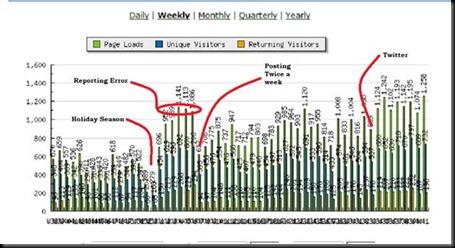 This first graph is what I use to track page hits. This is readers who actually come to the blog and view a page. This does not include RSS feeds or any other reader traffic. You have to visit http://VoIPNorm.blogspot.com to show up here.

This timeline shows from the beginning of when I started recording hits on my blog. There is one slight discrepancy in there which is highlighted as a reporting error. Someone had copied some code from my page taking the StatCounter tracking code with it and pasted it into their own blog. Hence the dramatic jump there. I was really excited until I realized what was happening.

After the Holiday Season which showed a significant drop in traffic, for obvious reasons, I was reenergized and I started posting twice a week. I was determined to increase readership. Only posting once in a blue moon wasn’t cutting it. The first few weeks showed some promise. Although I wasn’t jumping out of my skin I was happy I had made some positive progress. This is a niche blog after all and I have to set my expectation to the right level.

Following the increased effort I also redesigned the look of the blog which showed a slight increase in readership but hardly noteworthy. Although I could also attribute growth to organic growth there was no one thing that was really standing to show significant growth. It looked like I was stuck with organic growth. This was at least better than the previous no growth at all.

About 8 weeks ago I added two important elements. The ability to subscribe via email and also automatic retweet of all blog posts. I had a Twitter account but wasn’t taking full advantage of it. Not that I have a big following but I have a few followers that do. Also my Live, LinkedIn and Facebook accounts are all interconnected so when I Tweet it also shows up in those other areas (although they account for 0 traffic, just thought I would mention it). This gave some interesting results. It was an immediate increase in traffic. It was somewhere in the range of 10-20%. Impressive. But I know that StatCounter had previously led me astray so I wanted more evidence. 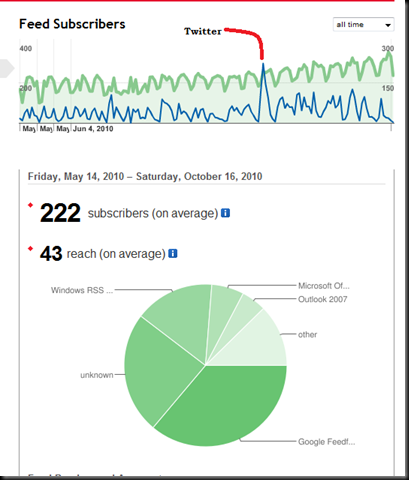 Something else I did a while back was start using FeedBurner to collect subscriber stats. RSS Feeds etc. Previously I had tried forcing people to come to the blog by restricting what you could read in RSS but I got some negative feedback around that approach. People basically stopped reading. Lesson learned. This screen shot is taken over all time since I started using FeedBurner. It shows the immediate results of adding Twitter. Not only are people coming to the blog but they are also subscribing more. If I narrow in on just the last 30 days you can see a significant average increase. Although I haven’t hit 400 subscribers for a day I am pretty sure it’s not too far away. 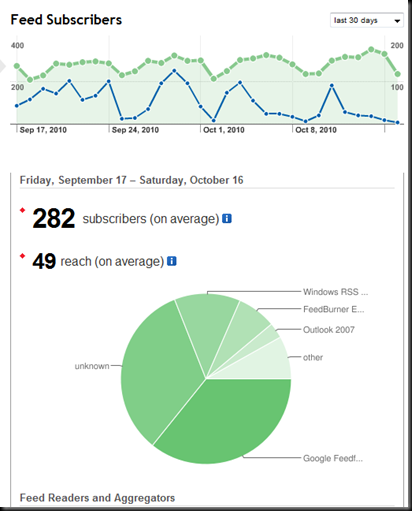 So does Twitter make a difference? For me the answer was yes. Although its taken me a while to take advantage of the tools available, I can clearly see what's working and what's not. When I started blogging I had no clue what I was doing, so it’s been a work in progress. Is it perfect? No, but I only use free tools and other than time blogging has cost me nothing and I enjoy writing content.

My lessons learned around blogging are: