Sometimes in life, things are a fine art to get just right. Media Termination Points are kind of like that along with other resources in the Cisco VoIP infrastructure. Knowing where to place them and what resources to use can be a little confusing to those new to Cisco VoIP or those trying to do interoperability to Microsoft Office Communications Server for the first time. This post builds upon a much earlier post I did on configuring MTP’s for interoperability with OCS.

The number one rule to remember when doing interop Between CUCM and OCS is if you want to avoid having VoIP trombone across your WAN links is you’re going to need to place some MTP’s at the same site as a mediation server. Although the SIP traffic is not going to be routed to your MTP’s from the mediation server, RTP traffic certainly will. So how is this accomplished?

First off, for every mediation server you are going to allocate a SIP trunk in CUCM (doesn’t matter what version it’s all the same). Secondly, you’re going to need to build the MTP, a Media Resource Group and a Media Resource Group List. Of course the media resource group and the media resource group list can contain more than just MTP’s but to keep things simple I like to have specifically defined groups and lists just for the SIP trunk to which you want to control the flow of RTP traffic. Example below: 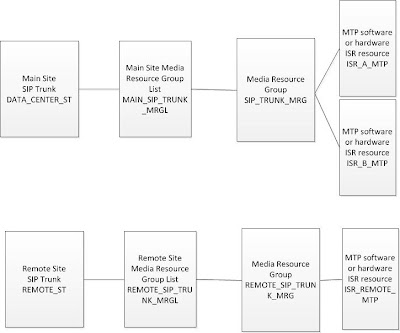 In this example I have shown a workflow of what the MTP design would look like within CUCM. At your main site if your CUCM servers aren’t terribly taxed you could actually host your MTP’s on the CUCM subscriber servers themselves but at the remote site you would need a local MTP resource to avoid the trombone effect I described earlier with RTP.

This next diagram shows a simplistic picture of the signaling and RTP traffic that is happening between a Cisco IP Phone and Microsoft Communicator endpoint. I have removed the endpoint signaling traffic just to simplify the example a little. But as you can see the RTP local to the site stays local when you have the right resources in place. 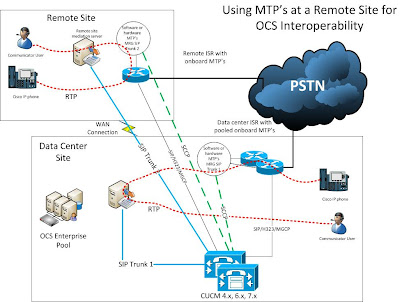 In this example I have used the design of configuring the MTP resources on the ISR devices utilizing either DSP hardware or router software. Using DSP’s might be a good idea if your router is multitasked and its CPU utilization is already seeing regular usage beyond 50-60%.

The idea behind this post comes from some recent questions from customers in regards to remote site configuration. This type of design is for the current version of OCS 2007 R2 when doing interoperability to a CUCM environment, how this will change in the future is yet to be seen.